Scrub Sets for the NHS

Locks Heath Rotary Club rose to the challenge presented to them in early April with a call for help from the ‘Team Scrubbers’ sewing team working in and around the local area of Warsash, Locks Heath, Park Gate, Whiteley, Stubbington, Lee on the Solent, Fareham and Gosport who are serving the Southampton and Portsmouth NHS areas. The co-ordinator of this ‘Team Scrubbers’, Lin Gell, is managing an ‘army’ of over 130 people working from their homes in the sewing team and as the requests for assistance from hospitals and health care facilities grew there were not enough hours in the day to keep on top of the work. Help was really needed in the logisMcs of moving raw materials around the team and also bringing the finished Scrubs back to Lin, who lives in Hook, so that they can be checked before being taken to the local heath care faciliities. Locks Heath Rotary set up a ‘Central Base’ for co-ordinating the requests from the sewing team and passing the requests for transport out to whichever volunteer Rotarian was able to respond in the time required. In nearly 5 weeks we have done 31 runs for them. Currently this particular ‘Team Scrubbers’ has supplied over 4,000 sets of scrubs to Southampton General Hospital, QA Hospital Portsmouth, the new Hotel Hospitals in Southampton, and many other health care facilities such as The Rowans Hospice in Southampton, GP’s and Health staff working in the Community. The Rotary Club of Locks Heath was so over-whelmed by the work the team are doing that as well as providing the logistis support to them virtually every day of the week since mid April we have donated £500, which was used almost immediately to purchase the material for 80 scrub sets that were made for the Rowans Hospice. The local Solent Enterprise Partnership donated £4,000 in April among many other small donations and in mid May Chris Evans had £5,000 worth of cloth, funded by various stars and others, delivered to Lin. Rotary were then involved in distributing part of this delivery around the sewing team. Recently we did have a different logistis job to do because the sewing machines being used by the team were startig to breakdown due to the very heavy use. Lin put an appeal out on Social Media with the result that numerous offers were made by people donatig their Sewing and Overlock machines to the team so that they could carry on their work. Locks Heath Rotary then helped pick up these machines and distribute them around the sewing team as required. One of the time  consuming jobs is cutting out the material from the patterns and North Sails, a sail maker based in Gosport has offered to cut up to 100 sets out each week for free. Once again Locks Heath Rotary on our daily runs assisted by picking up some of the sets and taking them to the sewing team. 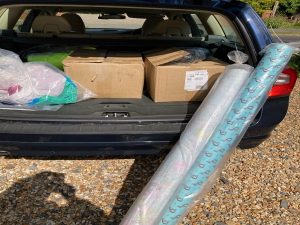 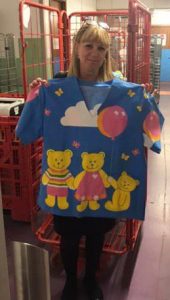